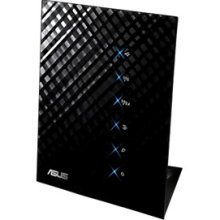 The Belkin 54G wireless access point I’ve been using for a few years has been suffering since we extended the house.. there’s just not enough range on it, and it tends to temporarily lock up if it’s hammered a lot.

Finding a replacement took a lot of research, but I eventually decided on the ASUS RT-N56U, costing about £85, after reading some great reviews, including one in PC Pro. It’s worth reiterating that it doesn’t contain an ADSL router.. so if you’re on that type of broadband you’ll still need one of those in your set up. I’m happy with that, since the master socket isn’t where I want to place the wireless router anyway.

Configuration was straight-forward, aided by a decent web interface. As soon as I plugged it in I upgraded the firmware to the latest version from ASUS. I’d also seen that there are unofficial firmwares from a Russian group which are meant to fix a bunch of stuff & add new features. I’m sticking with the ASUS firmware unless I hit stability problems or find that I want to tinker later on. I certainly like the option to have a customised firmware should the need arise.

After having it running for a few days I’m really impressed with the speed and coverage across the house. It allows you to either use one SSID for 2.4Ghz and one for 5Ghz.. which lets you decide which band you want a device to use. Or set the same SSID for both, and it’ll automatically switch you over to the fastest band according to the signal strength. I was in the kitchen, and it connected on what must have been the 2.4Ghz band (due to the distance), then moved to the living room where the speed shot up & was obviously using the 5Ghz band.

Here’s a table showing how the signal strength has been affected by the upgrade;

And here’s my unboxing video;

After the untimely death of my Topfield box, and less than stellar performance of the 3view box, I ended up sending that back & buying the Humax HDR-Fox T2. Since I bought it over a year ago there’s been a huge amount of progress on a custom firmware which enables you to install ‘packages‘ that add a whole bunch of new features, including;

There are some videos on YouTube that show a lot of these features in action, together with a guide showing exactly how to install it onto your box. It’s a simple, and reversible process & the guys that have worked on it have helped improve the features on the box no end!